The Regional Secretary for Energy, Environment and Tourism announced today that the Azores has been certified as a sustainable tourism destination through the EarthCheck certifier and under the strict criteria of the Global Sustainable Tourism Council (GSTC). 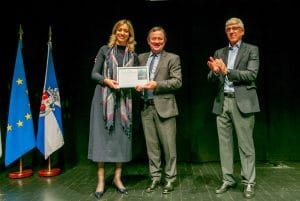 “We are the first and only archipelago in the world with this certification”, as well as “the only region of Portugal, in a set of 13 regions of the world and only eight countries,” said Marta Guerreiro, who spoke in Angra do Heroísmo at the opening session of the GSTC Annual Congress, which brings together about 300 participants from 42 nationalities, ceremony presided over by the President of the Government, Vasco Cordeiro.

“Today we make the difference once again between those who stay in the past and those who have a leading role in shaping the future,” she said. “Proudly, I say that the Azores are leading this path worldwide. ”

“We are at the forefront,” said the Regional Secretary, stressing that this was a “commitment” from the Government of the Azores, but that the Azoreans “assumed as their own”.

“People and entities were with us, they did it with us,” she said.

“For us, this is the way to make politics, to be, to listen, to reflect, to integrate, to produce and to fulfill”, said Marta Guerreiro, saying that the Azores Government has started the destination certification process in December 2017, as part of the conference ‘Azores 2017: Towards Sustainable Tourism’, an event integrated in the celebrations of the International Year of Sustainable Tourism.

“Today herre is our promise to continue working to always make the Azores what it is today: a sustainable tourist destination”, stressed Marta Guerreiro, noting that it is “a challenge that extends to all players in the sector, who have already been shown to be involved in this commitment towards sustainability, collaborating on this project with high commitment and dedication, but above all with high enthusiasm and responsibility.”

For the Regional Secretary, “the certification we have received today is not an end in itself; on the contrary, a certified destination in terms of sustainability can never consider that its work is done”, being “continuously aware of its development and its involving a growing range of local and international actors and actors.”

“We have been repeating several times that we would do everything to make sustainability go from utopia to reality, in a more present and consequent action in our lives,” said the Regional Secretary, considering that certification was only possible because “there was humility. accept this constant work of self-analysis and improvement.”

Marta Guerreiro said that the process was developed in several phases, highlighting the last one, the on-site audit, which ensured “full transparency and requirement throughout the process”, and included “the review of all documentation and data collected during the phase. ‘Benchmarking’, as well as the official visit to three islands of the archipelago chosen by Earthcheck: São Miguel (Eastern Group), Terceira (Central Group) and Flores (Western Group) power plants, waste processing centers or water treatment plants in order to verify their compliance with the criteria ”.

At the time, the Regional Secretary pointed to the various projects underway towards sustainability, with emphasis on the Sustainability Booklet, with public and annual subscriptions of commitments under the UN Sustainable Development Goals by companies, associations and the public sector. It has “about 100 subscribers distributed across the islands, with over 300 public objectives”.

This site uses cookies to improve your site browsing experience. From these cookies, cookies categorized as necessary are stored in your browser as they are essential for the basic functionality of the site to function. We also use third party cookies that help us analyze and understand how you use this site. These cookies will be stored in your browser only with your consent. You also have the option to disable these cookies, but this may affect your browsing experience.
Necessary Always Enabled
The necessary cookies are absolutely essential for the site to function properly. This category includes only cookies that guarantee basic functionality and site security features. These cookies do not store personal information.
SAVE & ACCEPT