The Regional Secretariat for Energy, Environment and Tourism, through the Regional Environment Directorate, carried out, between February and March, several actions under the LIFE VIDALIA – Valorization and Innovation project, targeting the endemic species “Azorina” and “Lotus”, in all the islands covered by this project. 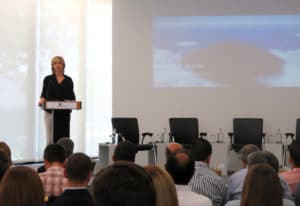 LIFE VIDALIA aims to conserve these two endemic Azorean species, protected by the Habitats Directive, on the Faial, Pico and São Jorge islands.

In total there will be 17 intervention areas, 12 of which will be directed to “Vidália”, a species of the only endemic genus of the Azores, and five to “Lotus azoricus”, an endemic species, totaling an area of ​​about 95 hectares. The first sequence of conservation work is the removal and control of invasive alien plant species in the intervention areas where the “Vidália” populations of Morro de Castelo Branco, in Faial Island, and Fajã dos Cubres, in São Jorge, and the population of “Lotus azoricus” from Calheta do Nesquim, on the island of Pico, in order to prepare the areas for future endemic species reinforcement plantations.

This five-year project, with an investment of € 1.8 million, will also have other very important components in a strategy for sustainable development, the promotion of nature conservation habits, including specific environmental education and awareness programs of environmental volunteering.

At the same time, the sowing of plants that will be used to recover the habitats of the intervention areas has already started. Since the project was approved in July 2018, the Regional Directorate for the Environment and Azorina – Society for Environmental Management and Nature Conservation, beneficiaries of the project, have carried out a series of actions involving the reevaluation of the intervention areas, the harvesting of seeds of the target species, the definition of the operational plan and the acquisition of the necessary materials for the project implementation.

LIFE VIDALIA conducts conservation work in all sites of the Natura 2000 network of Faial, Pico and São Jorge islands where “Vidália” and “Lotus azoricus” occur.

This site uses cookies to improve your site browsing experience. From these cookies, cookies categorized as necessary are stored in your browser as they are essential for the basic functionality of the site to function. We also use third party cookies that help us analyze and understand how you use this site. These cookies will be stored in your browser only with your consent. You also have the option to disable these cookies, but this may affect your browsing experience.
Necessary Always Enabled
The necessary cookies are absolutely essential for the site to function properly. This category includes only cookies that guarantee basic functionality and site security features. These cookies do not store personal information.
SAVE & ACCEPT